Originally located at the northeast corner of Harbor Boulevard and Commonwealth Avenue, and later moved to Amerige Park in 1920, this small frame 1887-vintage building housed the realty offices of Fullerton founders George and Edward Amerige. After being sold by the Amerige brothers, the building, which is the oldest commercial structure in Fullerton, served as a law office, a barbershop, and a tool shed. The structure is now used as the meeting place for Fullerton Heritage. 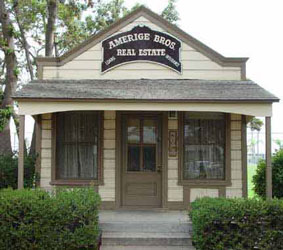