Fullerton Heritage is always looking for volunteers to help us on our many projects and we are happy to share our experiences and information with other preservationists. It's easy to reach us!

Enjoy the rich architectural heritage that exists in the city of Fullerton.

From 1897, Fullerton has celebrated the beauty of many women.

National Register of Buildings in Fullerton

Is My Property Eligible to be a Local Landmark?

A Guide to Researching the History of House - Home Advisor

How Old is My House pdf

Maps and locations, with links to destination points

History and development of the Forever Houses

Eichler & the Forever Homes in Fullerton

Eichler and the Forever Homes in Fullerton

Joseph Eichler (1900-1974) was a post-World War II real estate developer known for his well-planned tract developments in Northern and Southern California. His classic and award-winning homes—designed by the notable architectural firms of Anshen & Allen, Jones & Emmons, and Claude Oakland & Associates—were developed for individuals and families of average means. The Mid-Century Modern architectural designs of Eichler dwellings remain fresh, contemporary, and "modern" to this day and are so distinctive that his homes are just known as "Eichlers."

A retired butter and egg wholesaler, Eichler began building high quality homes throughout California in 1947, developing large tracks as well as small enclaves of nine or ten homes, always with the goal of bring affordable modernism to the masses. While the style of the ranch house, the single most prolific architectural design in Southern California after World War II, looked to the past California rancho period, Eichler's homes reflected the European modernist tradition, avoiding any hint of nostalgia or romanticism.

The Eichler legacy became the modern contemporary home with high quality design. Known for his stubbornness and singleness of vision, Eichler never wavered from the modernist vision of his progressive architects. Despite protests from potential homebuyers, Eichler was also the first mainstream tract home developer to sell to minority families, establishing a non-discrimination policy that offered homes to anyone of any race or religion. Eichler would often not sell his homes to potential customers if they protested his policy of selling homes to minorities, telling those who complained that they "were not worthy" of one of his houses. In 1958, Eichler resigned from the National Association of Home Builders when the organization refused to support a non-discrimination policy.

Eichler's homes were a critical and financial success for 20 years, but when he overextended his business, his building company collapsed in 1966, although he continued to build homes until his death in 1974. 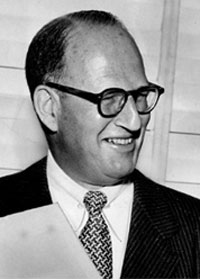 The majority of Eichler homes were built in Northern California, but Eichler also built hundreds of homes in Southern California, most notably in Granada Hills (100 homes), Thousand Oaks (125 homes), and Orange (350 homes). While many Orange County residents are aware of the three Eichler tracts in the city of Orange—Fairhaven, near Fairhaven and Prospect Streets, Fairhills, off Santiago Canyon Road, and Fairmeadow, near Taft and Cambridge—few know that Fullerton also has a development of these quintessential California homes.

Between 1953 and 1956, over 280 Eichler homes–called the Fullerton Grove development–were built in three different phases in the southern part of the city. The residences, advertised as the Forever Houses, are located south of Valencia, between Richman and Euclid on the streets of Maplewood, Jefferson (east side), Rosslynn (north side), Richman (west side), Adams, Oak, West, Ash, Elm, and Washington.

Although some of the homes have been modified or fallen into disrepair over the decades, the well-maintained ones still reflect the elements of modernism and high design that Eichler was seeking. Homes in Fullerton Grove that still exemplify the Eichler design are: 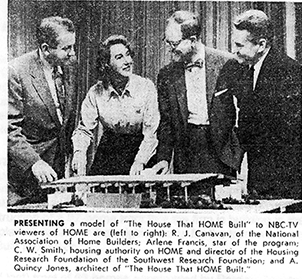 History and Development of the Forever Houses

In 1955, Eichler, a merchandising wizard, convinced his two principal architects, A. Quincy Jones and Frederick E. Emmons, to appear on the "House That Home Built" segment of the NBC Home television show that came on daily after the Today Show from 1954 to 1957. On the nationally syndicated show, co-hosted by Hugh Downs and Arlene Francis, Jones and Emmons offered to create house plans for any developer who could come up with $200. The plans were designs that Jones and Emmons had created earlier for Eichler. The local building firm of Pardee-Phillips took up the challenge and constructed over 300 Eichler homes, naming the tracts the Fullerton Grove development. Advertised as the "Forever House" model, the aluminum, glass, steel, and masonry dwellings sold from $12,950 to $19,500 for the deluxe model, requiring a $1,250 to $2,000 down payment (with little or no down payment for veterans).

The architects offered seven floor plans for the three- and four-bedroom, two-bath homes that featured floor-to-ceiling fireplaces and glass walls, color coordinated kitchens and bathrooms, birch cabinets, sliding glass doors, and an electronic weather control system. Advertising extolled the "Dream Kitchen of Tomorrow" that contained 14 major built-in items. The homes were noted for their simple, plain façades, few windows, flat roofs, and carports situated front and center. A unique touch was orange trees in the front and backyards, a tribute to Fullerton's agricultural past. The Fullerton Grove development quickly sold out.

Fullerton was not the only city to benefit from the television offer of Jones and Emmons. Local builders in the cities of Cleveland, Chicago, Denver, San Francisco, and Kansas City also constructed similarly styled Eichler homes.

Owners of Eichler homes often cannot put their finger on what it is, but there is something different about these modernist gems. Eichlers have covered carports, sunny atriums, floor-to-ceiling windows, flowing interiors, and a sense of openness not found in conventional cookie-cutter homes. Young buyers in particular are attracted to the cool retro-style of an Eichler home that offers an alternative to the endless sea of bland McMansions or historically themed developments crammed into suburbs.

Eichler's homes were affordable, but they always incorporated both quality and cutting-edge design. His homes were designed to take advantage of California's climate and were noted for bringing the outdoors inside through the innovative use of glass and atriums. The unique Eichler style, which relied on the ready availability of large tracts of undeveloped land in the suburbs, could not be duplicated today. The low-slung dwellings featured simple, plain façades with few windows and a flat roof. Carports were situated front and center, an acknowledgement of the car as a symbol of social status. Interiors featured open-beam ceilings, glass walls, atriums, wood cabinetry, built-ins, and open floor plans with living and dining areas separated from kitchens by breakfast bars.

Over the years, homeowners have altered or fussed-up their sleek Eichler homes—changes that would have horrified the developer—but new owners are restoring them to their original style. The modernist style of Eichler fell out of favor in the 1970s and 1980s, but there has been a recent wave of interest in mid-20th century modern homes, which has sparked renewed interest in Eichlers, and homebuyers have been snatching them up the minute they go up for sale. A well-maintained and unmodified Eichler can now sell for hundreds of thousands or even millions of dollars. Eichler homes have been featured in a number of commercials, television shows, and films, including the 2007 animation classic, The Incredibles. Celebrities have owned or lived in Eichlers, and it was actor Gary Cooper who established the reputation of architect A. Quincy Jones when he hired Jones to design his dream house in the early 1950s. While living in Silicon Valley as a child, Steve Jobs was raised in an Eichler, and it is believed Eichler's modernist, expressive design influenced the simplicity and elegance of Apple's products.

Typical features of Eichler houses and tracts include:

Many of the design elements in Eichler's homes, such as glass walls and open floor plans, are common now, but at the time they were unusual and even striking to homebuyers.

he quintessential modernist photographer, Julius Shulman (1910-2009) made several trips to Fullerton, documenting the new homes, schools, and businesses rapidly being constructed after World War II. He photographed the Forever Houses in phases as they were constructed, shooting both interior and exterior views. The photographs promoted not only the homes but a new modernist lifestyle for California homeowners. Shulman's vast photographic collection is now housed at the Getty Institute in Los Angeles, but the Local History Room of the Fullerton Public Library has prints of some of the Fullerton Grove photographs he took, as well as extensive information on this neighborhood's development. The Fullerton Heritage website also has a driving tour of the city, Mid-Century Modern Driving Tour, which features other architectural gems around town that were photographed by Schulman.

The following websites will provide more information on Eichler and his housing developments: